Add your comments and questions about the mechanical control of model railway signals and points particularly by the WIT (wire-in-tube) method.

Harold has asked me to post an article about a different application for his wire-in-tube products that I have had success with.

I saw his demo at an exhibition recently and while I was very impressed, I didn’t immediately see a use for me as my new layout will run on DCC, including point and signal control (via slow action point motors).

But one of my concerns with signal control was matching the throw of the point motor to the throw of the signal. Tortoise motors have a raw throw of nearly 20mm, where as my signals have a throw of about 7mm. The signals are robust enough – they are made of brass from MSE parts – but I didn’t want to rely on them to stall the motor by having the motor pushing directly on the signals and 13mm is a lot to be taken up by omega loops or the like.

So when I saw MODRATEC at the next exhibition, I realised that there was a solution.

So what I have done is place a sig-wit and a crank-wit between the motor and the signal. Because I have set things up with a vertical motion, the crank doesn’t change the direction of throw, it just increases the throw of the signal from 7mm to 14mm. And the clutch mechanism of the sig-wit takes up the remaining excess throw of the motor. I built a little combined motor, clutch and crank unit off-line and am about to mount it under my base board and connect it to the signal. Before I do, I have tested the operation of the unit by powering up the motor in each direction.

Harold has agreed to post a photo of the unit and I hope that will better explain what I have done.

The unit looks pretty rudimentary but so far, it seems to work fine.

I should note that the depth of the unit is governed by the depth of my (portable) baseboards below rail height. In an ideal situation, I would have increased the distance between motor and clutch and between clutch and crank. This would minimise the impact of the “swing” of the crank movement and the motor movement. It would also relieve some of the pressure to get everything lined up exactly square and get all wires at an equal distance away from the backboard of the unit (neither of which I have quite managed with my first attempt). The extra distance could probably be achieved by building a unit with horizontal movement and using the crank to change it to vertical movement. But I couldn’t do that because the area I am working in is particularly cramped with other equipment so I was limited to a vertical motion. Elsewhere on the layout where there is more room, I will try a horizontal system.

I hope this gets a few minds ticking! 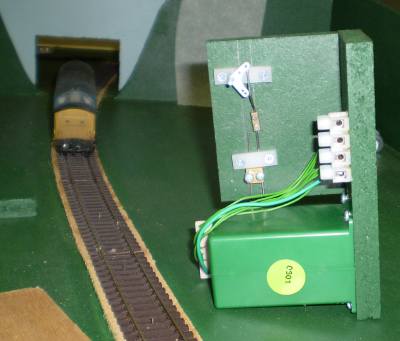 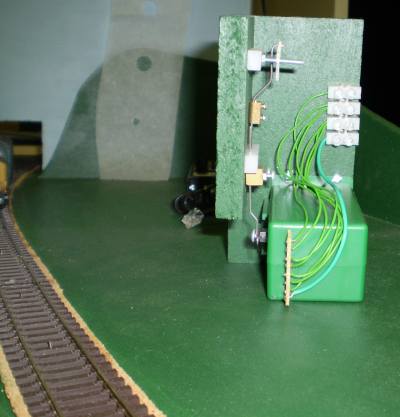 Gordon, this is a timely posting for me as I have been contemplating how to control signals with a motor. I had not gotten very far along the process, decisions on control methods and switch controls and signals are to me holistic and the thought process becomes iterative. If I do A then B applies but If I do C then D applies instead but etc etc...

Your solution looks good but the cost of fitting each signal as well as each switch even for a modest railway with a Tortoise is scary. For example my (present plan) for a simple junction involves only 4 points but needs an 18 lever frame, such is the complexity of the signalling (I think) and that does not cover the storage yard.

I have been wondering if there is a cheaper option than the tortoise which works in the same way. If I find anything, I'll post it here. I'm sure there must be even if usually in an industrial application.

Hopefully you will keep the forum updated with your developments.
Thank you

I presume that you have considered direct mechanical control using our WIT products. Sig-wit is designed as a low cost but very effective easy to set up system. It doesn't stress the signal and allows setting of the danger and clear positions of semaphores irrespective of wire travel.
All the best from "modadmin"
Forum Administration
MODRATEC
Top

No haven't seriously considered the sig-with solution. But looking at it briefly it may be an option. I will think about it more. Thank you for drawing my attention to it.
R.
Top

Richard,
Your point on cost is valid. The reason why it wasn't an issue for me was:
1) I am only modelling a small branch line station with a limited number of signals
2) I already had the tortoise motors from a previous layout so the cost to me was only the sig-wit parts - which are indeed reasonably priced.
3) By using tortoise motors I can control everything via DCC, leaving me the option later to have everythign controlled by computer - somehing I would like to pursue at some stage in the future, using this layout as a test bed.
But if you are starting from scratch and especially if you are not using DCC, Harold's full blown mechanical system is well worth considering. I have seen his demonstration unit in the flesh and it is very impressive ( and you get a realistic looking lever frame) - and he didn't pay me to say that!

Thanks for those observations Gordon.
Richard.
Top
Post Reply
6 posts • Page 1 of 1