MODRATEC is grateful to Henry Statkowski for contributing the following article and illustrations regarding rail signal usage in North America.

North American railroad signals, a possibly confusing assortment of red, green, yellow, and white lights used in almost every combination possible, to include flashing lights. With a little luck, hopefully I'll be able to unconfuse you and otherwise enlighten you on the way we do things here. Actually, I even learned a thing or two while writing this.

North American railroad signals are generally governed by one of three guidelines: the Association of American Railroads' Recommended Standards and Practices, the Uniform Code of Operating Rules, and the Canadian Code of Operating Rules. In the United States of America, "A.A.R." rules (officially they're nothing more than guidelines) generally prevail east of the Mississippi River, and "U.C.O.R." rules generally prevail for Western railroads. The Canadian rules, of course, apply in Canada. Since these are all guidelines, each individual railroad has the option to have its own set of operating and signaling rules, based on its operating environment, which may or may not be unique. All generally follow the same basic guidelines. AAR, UCOR, and CCOR rules are all similar, but each is slightly different.

Styles of fixed signals sometimes can readily identify the railroad. For example, the Baltimore & Ohio Railroad (which became part of the Chessie System, and then CSX Transportation) was noted for its unique Color Position signals. The Pennsylvania Railroad (which became part of the Penn Central Railroad, then Consolidated Rail Corporation (Conrail), which was ultimately split up and sold off to CSX Transportation and Norfolk Southern Railroad) was noted for its Position Light signals, which also ended up on railroads owned or controlled by the PRR (Long Island Railroad, Lehigh Valley Railroad, Norfolk & Western Railroad). Other fixed signals such as Semaphore signals, Color Light signals, or Searchlight signals, were generally used throughout the rest of the country, with Color Light or Searchlight signals replacing Semaphore signals over time as being more efficient, less maintenance intensive, and generally providing better visibility of their signal aspects under adverse conditions (nighttime, snow, rain, etc.). Unless required by operational conditions or restricted clearances, signals are located to the right of the track since right-hand running is the general rule of thumb for North American railroads.

To give you an idea of the various styles of fixed signals used in North America (and this is not all-inclusive), Figure 1 shows some of them:

Are we totally confused yet? Trust me, it gets better. When the Consolidated Railroad Corporation was formed by the merger of a number of railroads, some of them products themselves of mergers, it inherited all the signal styles shown above except for the Color Position ("B") and Lower-Quadrant ("G") signals (and, through trackage rights, still had to deal with Color Position signals). An entirely new rulebook had to be written to include examples of all the signal styles, their aspects and meanings. On the Color Light signals, for example, what Yellow-over-Yellow had meant on one railroad was not necessarily the same as Yellow-over-Yellow on another former railroad of the new company.

As defined by the Association of American Railroads, a Fixed Signal is "A signal of fixed location indicating a condition affecting the movement of a train or engine." Signals marking the limits of an interlocking plant obviously qualify - they don't move, and they tell the engineer whether he can go or not. Then again, a Fixed Signal could be nothing more than a permanently-mounted speed limit sign - it indicates a condition affecting the movement of a train. Fret not, we're not going to discuss signage; we've got enough on our platter already.

North American automatic block signals and interlocking signals (which are also usually tied in to an automatic block system) are speed signals, not route signals. They tell an engineer how fast (or how slow) he may proceed, or if he may proceed at all. They do not tell him specifically what route he will or will not be taking, but sometimes the signal aspect can infer that. If, for example, at a junction with two possible routes, one straight ahead and the other diverging, a "Clear" signal aspect would indicate the straight ahead route, whereas a "Medium-Clear" signal aspect (which is not the same thing) would indicate the diverging route. They both indicate that the next two blocks are clear and that the train may proceed at maximum authorized speed, but the Medium-Clear signal aspect tells the engineer, "Proceed not exceeding Medium speed through the interlocking." And, there are exceptions to the rule!

And now, being totally unfamiliar with North American practices, you ask yourself, "What, pray tell, is Medium speed?" Well, railroad signal terminology uses specific terms to identify signal aspects and what those signals mean. Since fixed signals are speed signals, they generally inform as to the maximum speed permitted, regardless of the maximum speed permitted for that particular section of track, and use the appropriate terminology as part of their name. Terms used are generally as follows:

So, right now everyone is probably wondering what these signal aspects look like. Don't worry; we'll get there. First, however, let's do a brief discussion on signals, signal masts and such. One signal, which may or may not be mast-mounted, applies to an individual track immediately to its left (remember, the signals are usually on the right-hand side). Three tracks across, all signaled, would have three sets of signals, each immediately to each track's right side. See Figure 2. 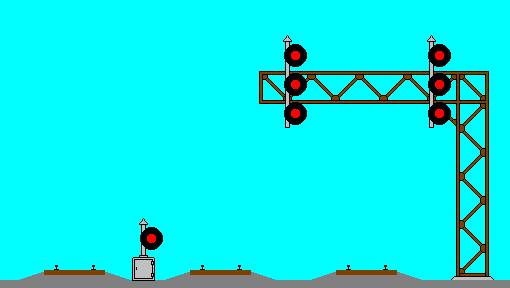 Some railroads span three, four, or more tracks with a full or partial signal bridge, as was done in this example. As you can see, each set of tracks has its own set of signals - the one on the far left has a Dwarf signal, and the other two have three-headed Home signals, all mounted on the signal bridge. Railroads don't particularly like sticking a full-sized signal masts out in the middle of a bunch of tracks and sometimes use signal bridges instead. If individual signal masts had been used, they would have been placed in the same relative location as shown in Figure 2, except they would be mounted in the ground. One track - one signal. It may have one, two or three heads on it, but it still counts as one signal.

Trackside fixed signals have Aspects, Names, and Indications (these are the standard terms used):

And now comes the fun part - examples of various signal combinations available (not all-inclusive, just the basics). For graphics, we'll use a two-headed automatic block Searchlight signal (automatic block signals are identified by a number plate and may or may not have diagonally staggered heads), a three-headed interlocking Searchlight signal, a Pennsylvania Railroad position light signal, and a Baltimore & Ohio color position signal. In actual application, the number of heads on the mast may vary (some railroads only use the top two), but we'll try to keep this as uncomplicated as possible. Likewise, although the example signal shown is an interlocking signal, some of the following signal aspects would also apply to automatic block signals.

Oh, one thing to keep you from getting any more confused than you or I actually are. Although red usually means "Stop," and a lot of the signal indications given include a red light, someone once said, "If it's not all red, it's not red at all." What does that mean to you? It means unless every head on a multi-headed signal is red (thereby meaning "Stop"), then it's not a "Stop" signal at all but something less than "Stop." Trust me, there is logic to the system.

Note for Rule 282a - Yellow lights are flashing for this aspect.

Note for Rule 286 - Lights on lower head of Position Light signal flash for this aspect.

Note for Rule 291 - Designated by number plate or marker light. Railroads desiring to avoid stopping may amend rules accordingly, generally used on uphill grades where stopping is not desired. Train may pass such signals identified at restricted speed.

As stated previously, the examples shown are not all-inclusive (there are others not included here), nor are they representative of any particular North American railroad (unless otherwise noted). But, they give you a general idea of what an engineer might see as his train approaches an interlocking. Out on a main line, the number of possible aspects generally drops down to four basic signals:Clear, Approach-Medium, Approach, and Stop-and-Proceed. And, despite the multitude of color combinations, including flashing lights, there is a certain logic to it all, designed to keep trains moving as fast as possible, and, at the same time, as safe as possible. Signals with "Slow," "Medium," "Limited" or "Restricted" as part of their name indicate that at this signal or the next one you're going to be limited to that particular speed.  "Approach" means the signal has some information concerning the next signal.

So, are we still confused? I hope not.

The author, an American, is a former Signal Station Operator with what was once the New York, New Haven & Hartford Railroad Company (a victim of bankruptcy, merger into another railroad, and ultimate spin-off into various operating entities). If language or certain phrases appear strange or different, the author accepts full responsibility for such. Any comments are appreciated.

[You may contact the author through the Modratec Guest Lounge (discussion forum) where he goes, not surprisingly, by the user name: "Statkowski". ed]