© The content of this article copyright 2010 Jim Shafer. Send email for Jim Shafer via MODRATEC. 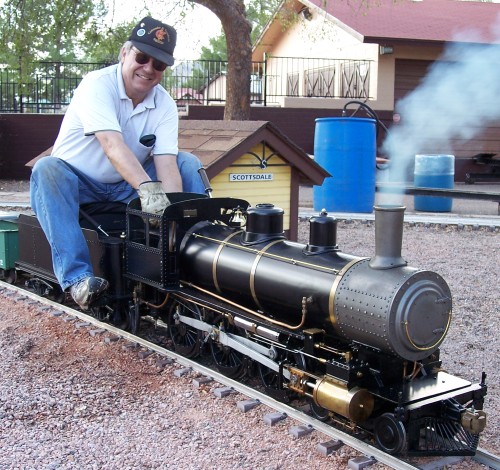 The author has varied railway interests.

The Scottsdale Model Railroad Club is located just outside of Phoenix, AZ, USA. We are in a railroad park donated to the city of Scottsdale by Guy Stillman. The Park features a 15" gauge scaled 5" to the foot narrow gauge live steam railroad. There is also a 7.5" live steam club, a N scale modular club, a O scale tinplate group and our HO and HOn3 club. The club is currently in a 20 by 40 foot room but will be moving to a 32 by 40 foot room in a new model railroad museum that is under construction.

Our railroad will represent a line surveyed through Phoenix for a transcontinental alternative to the Santa FE in northern Arizona and the Southern Pacific in southern Arizona. It will operate in the 40s through 60s time frame and will highlight operations with freight car forwarding and timetable/train orders. It has not been decided if the new mainline will be black or will have automatic block signals. In any case we are exploring the use of interlocking facilities in the principle town/yard of Phoenix.

The electrical committee has developed a new system for controlling turnouts and signals. It is not really new to us, but we have adapted many ideas from others and crafted our own blend. The basic idea is to give us the greatest flexibility in control. Each signal, turnout, or other device has a stationary decoder assigned to it. The decoder can be activated by a push button, toggle switch, computer command, hand held controller, or another decoder. So you can throw a turnout by pushing a button on a panel, clicking on an icon on the computer, activating a command on a hand held controller or by throwing an interlocking lever. All the signals will be three color light heads. They will respond to track occupancy and turnout position.

The application that will join the interlocking frame to the railroad is the NCE minipanel. This device takes an input (pushbutton etc) and converts it into a 'macro'. The macro is a nearly unlimited number of commands to devices controlled by decoders. In the case of an interlocking frame, each button would correspond to one lever and the macro would activate the devices 'connected' to the lever. The minipanel is 3.2 by 2.7 by about 1 inch so it can be tucked into the lever frame. The panel is then connected to the railroad by plugging it in just like a hand held controller. The control bus provides the power and distributes the commands. The interlocking frame would only have 4 wires in one cable to the railroad.

We envision the part time use of the interlocking. When the lever frame is not connected to the railroad, turnouts will be thrown by pushbuttons on panels. The signals in the interlocking will be controlled by turnout position and occupancy. The macros that throw turnouts will control signals. We will not have anything so crude as contacts on turnouts controlling signals. When the lever frame is plugged in, the pushbuttons on panel will have their macros inactivated so the pushbuttons will not work. The tower man will be in control. We will be able to implement conditional signalling by having the interlocking level unlock the red aspect of the signal and allow the signal to show the proper aspect for the routing and occupancy that would have been showing if the interlocking were not active.

Some who have heard this concept presented point out that we can skip the lever frame entirely and set up a 2010 era system where a tower man clicks on icons on a computer to accomplish all the interlocking functions. But our railroad operates in 40s, 50s and 60s. Having a real mechanically interlocked lever frame becomes a highlight of the railroad. We plan to have a chair dedicated to the tower man. It will be like a child's high chair with robust arms that the lever frame can attach to. The front of the lever frame will be finished off to look like the outside of an interlocking tower. The paying public viewers will see the yard in front of them with the 'tower' behind. The levers will be visible through the windows. The public will be able to see the operator throwing levers and the turnouts and signals changing. Posters will explain the operations to the public. It will be a highlight.