[Ed: In October 2012, we learned that David Moffat had passed away. It is great that his legacy of skilful model building lives on through this article.]

The Hargroves Junction Light Railway is not based on any railway in particular. The railway is named after a fictitious place in NSW. The track and points are hand laid on wooden sleepers using miniature steel track spikes. The track gauge is 32mm or "O" gauge and the locomotives and rolling-stock are scaled at one nineteenth. This represents a narrow gauge train running on two foot gauge track (as per Queensland cane trains). 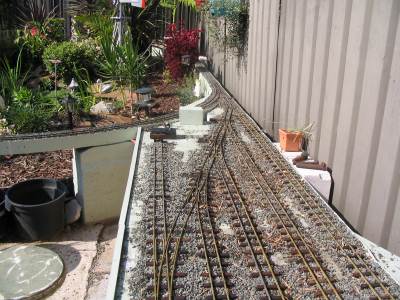 The track has been laid to accommodate both point to point and continuous running. There is a run-around loop at each end of the layout. The railway has been landscaped and planted out with various types of plants, a pond and a watercourse. Garden lighting, both low voltage and solar, allows for night running.

Some of the locomotives are live steamers. These are gas fired and radio controlled. One locomotive is based on an Innisfail Tramway Fowler Tender locomotive of 1926 vintage. I have built a string of both stick cane trucks and chopped cane bins to run with this locomotive. That is another story. 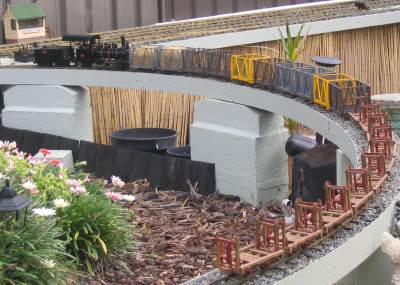 The MODRATEC lever frame has been set up to control four sets of points in the shunting yard Of the other two levers in the frame, one has been used as a locking or closing lever (Blue) and the other is spare (White). This frame has been mounted on a wooden frame suspended just above the surface of the baseboard by nylon spacers. This is to allow for drainage away from the frame and its mountings.

A metal cover has been built to cover the frame when not in use (see top photo). The frame has been finished to represent being mounted inside a signal box. The floor sections were made from brass sheet, cut and bent to shape. A diagram will later be added and placed on the wall of the signal box. There is an option to add another frame at a later date to control the points leading from the main line and into the run-around loop. These are not controlled by the existing lever frame.

The rodding to the points has been set up using 1/16" (1.6mm) brass rod. The levers were drilled out to accommodate this during construction. The angle cranks were made from 1/16" flat brass, drilled and cut to size. The pivots were created using 1/16" brass rod and a nylon spacer was fitted between the pivot base and the angle crank to allow free movement. The rod guides were made by soldering 1/8" (3.2mm) square brass tube to the top of a brass wood screw. Adjustment of the rods can be made by the use of 1/16" brass tube set up as joiners along the rod where required.